It’s pretty safe to say that pasta is by far one of the simplest and tastiest dishes to make. It’s perfect for quick (lazy) nights and ideal for a hungry crowd. But what if we told you there’s more than one way to make this already super easy-to-make meal even easier? Thanks to Twitter user Daibella, we now know of a new method to strain pasta — but we’re still torn on whether we actually want to try it. Let us explain.

Sponsored
How To Entirely Empty Your Bowels Every Morning—Top Surgeon Explains How
Now, after years of research, Dr. Gundry has decided to release an informative video to the public — free and uninterrupted — showcasing exactly which foods you need to avoid.
LEARN MORE
Sponsored

How to Strain Pasta

Daibella’s colander trick is actually quite simple: Instead of bracing yourself for the burn while attempting to drain pasta in the sink, just place your colander inside the pot on top of the pasta and the hot water.

Good morning to everyone. Just saw this on Facebook and spazzed. pic.twitter.com/YB8qJ2a1g5

And if you’re planning on saving a little pasta water to make your sauce (which is what you should be doing), you can just strain the leftover water straight into a bowl instead of the kitchen sink.

Initially, the post came from a dad named Doug Hagler (known as Ann Wenita on social media). Once Daibella saw his post, she immediately spread word about the trick on Twitter, and the rest is history.

“I’ve wanted a lid strainer for months, but keep forgetting to use one until I was cooking,” Hagler told Someecards. “Friday night, September 29, I made spaghetti and grabbed the old colander. Fitting it in the pot was spur of the moment. I thought it was nifty and funny, so I documented it with four pictures.”

Even though the internet seems overjoyed, celebrity chefs have cautioned at-home cooks to stray away from this method.

“[It’s] a tad bit risky and dangerous if you don’t have a perfectly fitting strainer and pot combination,” Giada De Laurentiis told TODAY. We see her point!

So what’s a hungry pasta lover to do? James Briscione, director of culinary research for the Institute of Culinary Education in New York City, advises scooping the pasta directly out of the pot using tongs.

Another smart solution that doesn’t involve tongs or placing your colander in your pot and hoping for the best? Invest in a pasta strainer pot ($25, Amazon) to simplify the process. 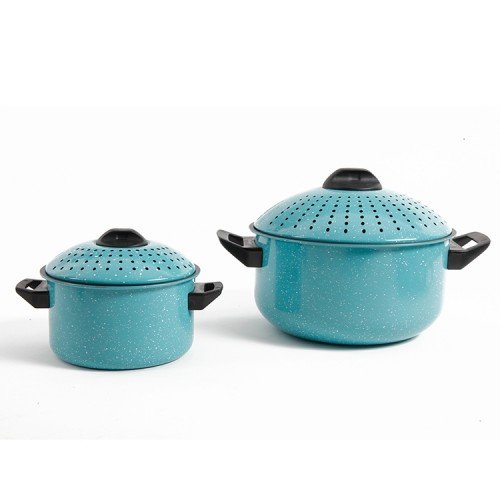 While we aren’t sure if expert chefs would agree with this method, using a pot with a strainer lid just might be your best bet. After all, dishing out a few dollars in exchange for unburned hands sounds like a winning idea to us.

3 of the Best Food Diary Apps