Sportscaster Erin Andrews has always followed her mom’s example when it comes to visiting the doctor every year. Despite her busy schedule reporting at NFL games and hosting Dancing With the Stars, the 39-year-old still makes time for yearly checkups — including a gynecological exam. In 2016, that annual visit saved her life.

“I got a text from my gynecologist and she said, ‘I need to talk to you,'” Andrews said in an interview with FirstforWomen.com. “And I was like, ‘Oh boy, that’s not good to get a text on a Saturday.'”

At the time, she was in New York City for an NFL assignment — but the hardworking journalist was actually in the middle of getting a manicure when she learned the horrible news: She had just been diagnosed with cervical cancer.

“I walked out crying,” she said. “So that was special, to explain why I didn’t want the flowers done on my nails. ‘No, I don’t need the gel! Just let me get out of here, I’m crying.'”

She quickly called her husband and her parents, and they all got on the phone together.

“Everybody went into the mode of ‘OK, what do we do next?'” she said. 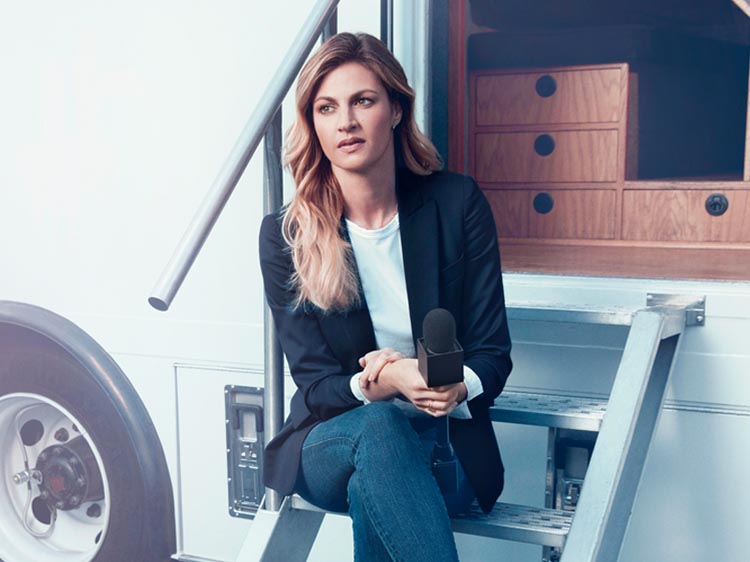 She admitted that she had a couple of days where she felt bad for herself, but before long, she was ready to get all the information and find out the next steps. In her case, that meant getting a couple of surgeries.

She wasn’t happy about missing time at football games or Dancing With the Stars. She also wasn’t excited about getting surgeries, or laying on the couch for a couple days after her procedures. But with the love and support of family and friends, she did what she needed to do — and that’s why she’s still alive today.

“I’m always hesitant to say I’m fine, because I don’t want to jinx it,” Andrews said. “But it’s been a year, and my checkups have gone well.”

Now, she hopes to use what happened to her to help other women. She began to open up about her diagnosis in January 2017, and she recently partnered with Hologic — a medical technology company focused on women’s health — to encourage and empower women to visit the doctor for annual checkups.

Together, Andrews and Hologic have launched the website ChangeThisStat.com to raise awareness that cervical cancer is preventable and treatable — but if women don’t go to the doctor to get checked out, the consequences could be dire. Andrews was floored when she found out months after her surgeries that every two hours, a woman dies from cervical cancer.

“Nothing hit me more — besides hearing that I had it — than hearing the stat,” Andrews said.

But that’s not the only shocking statistic about cervical cancer. Every year, 12,000 women are diagnosed with cervical cancer in the US, and 4,000 women will unfortunately die from that illness, according to gynecologist Jessica Shepherd, MD.

“It’s so important that she shares this story, because she’s here today,” Dr. Shepherd said of Andrews. “She’s able to share that story because she went to her doctor every year. She obviously had cervical cancer, but she got it treated and she’s here.”

Though the stats are still alarming, they’ve actually decreased quite a bit over the decades, thanks to the development of the pap test. Studies show that between 1955 and 1992 alone, the incidence and death rates of cervical cancer in the US declined by more than 60 percent — largely due to advancements in medicine over time. And by continuing to raise awareness about prevention and treatment, we can reduce the numbers even further. 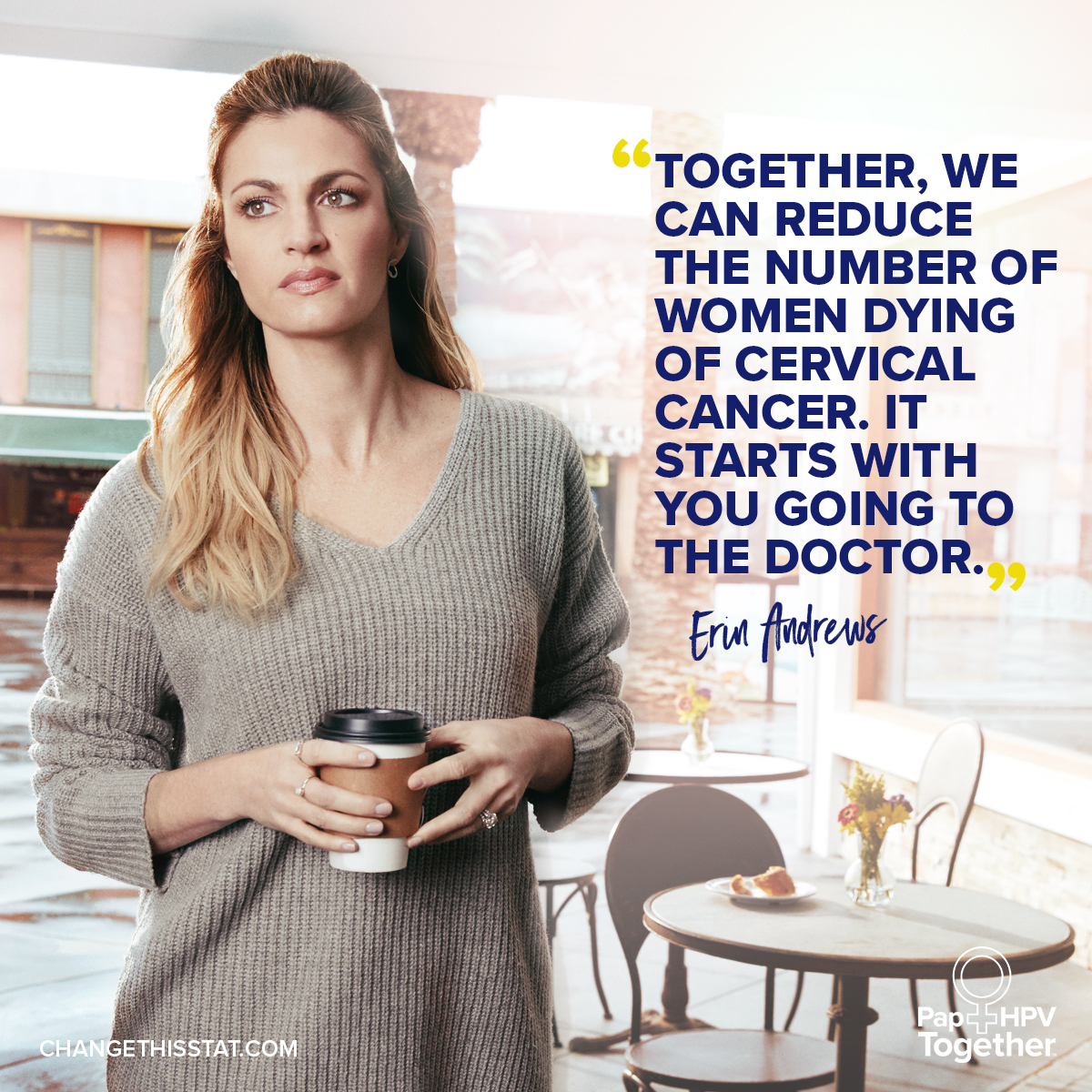 Shepherd said that today, getting a pap smear is key for screening, because many women do not experience symptoms from cervical cancer. When pathologists look at these cells under a microscope, they can see if there’s precancerous or cancerous cells there.

Frighteningly enough, women who do have symptoms from cervical cancer — like watery, runny discharge or irregular bleeding — usually have late-stage cancer.

How to Protect Yourself From Cervical Cancer

Some factors that put women more at risk for cervical cancer include: smoking, having intercourse for the first time at a young age, having a large number of sexual partners, and obesity. Since human papillomavirus (HPV) is the leading cause of cervical cancer and it’s sexually transmitted, it’s important to get the HPV vaccine as protection, talk to your partners about having protected sex, and go to the gyno regularly.

Shepherd thinks that women don’t visit the gyno because they might be fearful of hearing the word “cancer” at all. But from a healthcare point of view, there are varying degrees of cancer — and if you catch it when it’s early, your doctors have a much better chance of saving your life.

She says another issue might be lack of access to the best healthcare. But most insurance plans do cover a pap test — and even if you don’t have insurance, many clinics across the country offer them at low or no cost. And another problem might be lack of support; people don’t talk about cervical cancer as often as they talk about other types of cancer.

“It’s still a taboo topic because it’s the pelvis,” Shepherd said. “People are still not talking about their cervix. That’s not happy hour talk.”

That said, we all have the power to change the dialogue — and thus, the statistics. Andrews wants everyone — men and women — to be comfortable discussing this topic in everyday life. That way, women will feel encouraged and empowered to go to medical professionals sooner so they can be proactive in finding the right treatment if something is amiss.

“Listen, I have a very busy schedule,” Andrews said. “Everybody’s got a busy schedule and everybody likes to use it as an excuse. They think, ‘Oh, I can’t really make it to the doctor, Sophie’s got soccer.’ You’ve got to take the time to address this and go check yourself out.”

Shepherd added, “Because you can be better for everyone if you’re at your best self.”

Next, learn some more surprising facts about cancer in the video below:

Here’s How to Clean Your Private Parts

11 Things You Should Know If Cancer Runs In Your Family

My Mother’s Smoking Caused Her Lung Cancer. It Also May Have Caused Mine