I don’t remember mom leaving. Not the day she left, when I was two, nor the days or weeks after. I have no recalled memories of my parents ever being together. As far as I ever knew, mom had her own house and I lived with my siblings, Tammi and Jae, and dad, while my sister Pip, who lived in a residential home for the blind, would stay with us on the weekends. We were happy. I was happy.

But as those closest to me can attest, the abandonment issues that stemmed from that moment have affected my behavior deeply, doing their best to sabotage relationships throughout my life.

The year I was born, we moved from Surrey, England, to the Isle of Wight, an island on the south coast of England, so my dad Bryan could run a sailing school. My parents had been together for 10 years. Mom had worked in secretarial roles before having kids. My siblings and I thought our house by the sea was brilliant but, as I learned later, my mom Sue grew increasingly isolated and unhappy.

With the benefit of hindsight, I can see that dad was a wonderful father, but a terrible husband. With 50-odd people coming and going every week (the sailing school was run from the house), mom felt like the hired help, not enjoying her marriage or motherhood.

In March 1985, when I was just about to turn three and my siblings Pip, Jae, and Tammi were seven, eight, and nine respectively, unable to articulate her feelings, mom wrote dad a note and left. I don’t know what the note said. But dad later told me he lay awake that first night waiting for us to come into his room crying, but it took a week for any of us to ask where mom was. 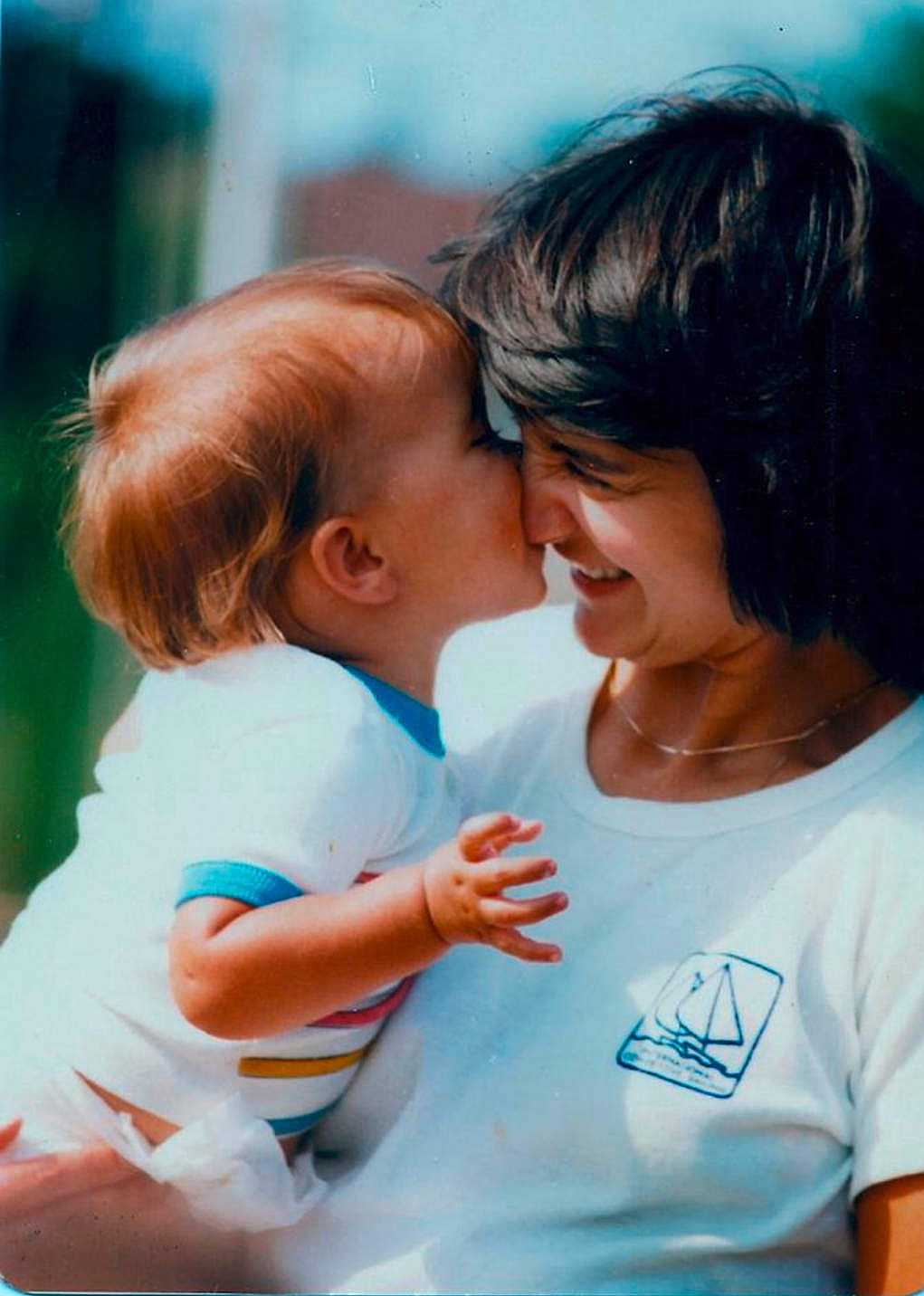 That’s how chaotic the house was — there were just so many people there. Whether Tam and Jae did indeed know mom had gone and internalized their pain, I don’t know. I don’t know if there were tears, but I don’t think so. I just don’t remember anything about this time on a conscious level — the impact for me really came later. Dad wasn’t angry, he was heartbroken, but blamed himself for not being a better husband.

Even though I don’t remember much about the time, there was always a feeling of ‘oddness’. That when I went to friends’ houses, there were two parents. Or if not a dad, then a mother — always there, fussing over them.

Mine lived in Dorset, a country in south west England, and I saw her for occasional weekends and holidays. She was my fun, mischievous, part-time parent. Dad juggled running his business with parenting demands. He was attentive, if a little madcap. He arranged with my school that he’d pick me up a few hours later than home time so that he could work longer. He had a secretary who was more likely to bandage my grazed knees than he was, but he’d also leap into action if I asked for a treasure hunt or when it was time for a bedtime story, a ritual we never missed.

While my sisters and brother have told me that he was so lost in his grief that he didn’t notice they were skipping school or hanging out with unsavory characters, I was younger and much less aware. From where I stood, dad was my hero.

For a long time, life was relatively untroubled — but in my late teens, when my brother’s first son reached the age I was when mom left, it really hit me. As he waddled about, all adorable and vulnerable, my heart hurt. How could I have been so insignificant to my own mother that she could have left me? I resented her. By now mom lived in Jersey and I lived with friends. When she visited, although we got on well, I felt agitated. If she so much as offered advice on how to do the washing up, inside I’d be screaming, ‘You have no right to tell me what to do!’ Instead, I processed (or didn’t process) my feelings the only way I knew how — partying hard.

I was always the most drunk person at the party, always the loudest and most reckless. I wasn’t very good at female friendships back then and felt more comfortable in the company of men. I drew boyfriends close then pushed them away, leaving them first before they had a chance to leave me. I sabotaged relationships with perfectly lovely guys to protect myself from the hurt of them leaving me. I was fiercely independent and the thought of relying on anyone else scared me.

I met my partner Gaz when I was 26. His first gift was a box of novelty plasters because I’d mentioned I was clumsy — an unintentional metaphor for the healing he’d do. I adored him and wanted our relationship to go the distance, which is why I couldn’t understand my behavior — I kept pushing him away, yet I was needy. I feared that I was unlovable and would eventually be abandoned and sought out evidence that would confirm that fear. I caused arguments to test him, looking to prove my insecurities right. Then I’d cry and feel vulnerable and terrified that I’d succeed. We observed that I was like the tide, pushing and pulling, while he was a rock.

In an attempt to get to the root of the problem I tried therapy, which addressed my fear of abandonment and my need to test those closest to me to see if they might leave too. My therapist encouraged me to ask mom the questions I needed answers to — why she left, how she could leave us kids, where she went, how often we saw her.

She told me she left because dad was driving her insane. She thought stability for us was more important than taking us with her. That the stability of the house we were familiar with was better than going to stay at her friend’s. As I listened to mom, I was not surprised she was unhappy. I realized that she was just another human trying to figure out her own issues. She knew leaving was controversial, that she’d be judged, that if any of us turned out badly, the finger of blame would be pointed at her.

I grew to feel protective of mom. I didn’t want people to judge her. She left because she was extremely unhappy in her marriage and because life had become chaotic. Once she left she was able to be a better mother to us. I didn’t have to grow up in an unhappy household and I was grateful to mom for preventing that. I became glad she had left.

While her style of mothering may not fit in with society’s mold, she taught me a valuable lesson: we all have a responsibility to put our own happiness first. I don’t want children, but I don’t believe this is related to my childhood.

Financially, environmentally and in order to pursue all our other dreams, Gaz and I have decided it isn’t the path for us. Women are burdened by too many ‘shoulds’. But should mom have stayed, foregoing her own happiness to ensure it was our mother who picked us up from school? Some might argue yes, but not me. In the decades since mom left, equality between the sexes has made great leaps in many areas. Yet the stigma around mothers leaving their children prevails.

My relationship with mom now is wonderful, and I love her. She visits often and is a constant support. We email each other every day for a catch-up. She is one of my favorite people and closest friends. Acceptance and forgiveness is key to happiness and I’m proud to call her my mom.

This article originally appeared on our sister site, Grazia.

Common Worries People Have When Their Partners Already Have Children

Being a Mom Is the Equivalent of Working 2 Full-Time Jobs, Study Suggests