Weeks after Jimmy Kimmel’s seven-month-old son, Billy, had to postpone his follow-up heart surgery because the Kimmel family came down with colds, the baby has undergone his second operation. ABC announced in a statement on Monday, December 4, that “he had a scheduled and successful heart surgery this morning.” Jimmy, 50, is taking this week off from his late-night show, Jimmy Kimmel Live!, to be with Billy while celebrities including Tracee Ellis Ross, Neil Patrick Harris, and Melissa McCarthy fill in for the emcee.

Back in August, Jimmy — who welcomed Billy with wife Molly McNearney on April 21, 2017 — revealed that his little boy was in need of more surgery even though he already underwent open-heart surgery moments after his birth. “He has to have two more open-heart surgeries. We would like to get them over with and not have to think about it all the time, but it could definitely be worse,” Jimmy told The Hollywood Reporter.

Billy is 3 months old & doing great. Thx for the love & support. Please remind your Congresspeople that every kid deserves the care he got pic.twitter.com/XcvvM6XFJ3

Jimmy made headlines earlier this year when he announced his son’s heart disease during his show in an emotional speech. “I knew I had to say something, and I knew that I would get emotional. It occurred to me that maybe we could make it into something positive. I had a lot of time to think at the hospital, and it just so happened that our government was deciding whether or not millions of people should have health care at that time,” he told THR of his decision to make a statement. “I think it made a big impact on American citizens. I’m not sure, based on how our so-called leaders voted, whether it made a big impact on the Senate or House.”

Despite his health obstacles, though, Jimmy revealed that Billy had made huge strides. “He’s doing great. Young Billy made his first visit to our office today. He’s juggling. He’s translating Flaubert from French into English. He’s really an amazing kid. No — he smiles,” Jimmy gushed. “That’s pretty much it. He is very interested in ceiling fans. He likes those a lot. I could get him to pay the same amount for Netflix just to watch ceiling fans.” So cute! 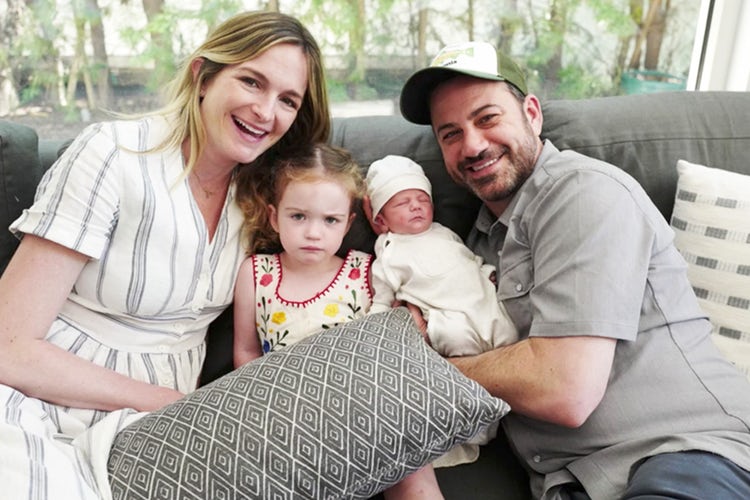 Jimmy with his wife, daughter, and son. (Photo Credit: R/R)

Jimmy and Molly — who tied the knot in July 2013 — are already parents to a three-year-old daughter, Jane Kimmel. The TV star is additionally a father to two older kids — daughter Katie Kimmel, 26, and son Kevin Kimmel, 23 — from his first marriage to Gina Kimmel.