Prince William has revealed that Prince George’s first day at ‘big school’ was an overwhelming success — in fact, he wasn’t the cheekiest child in attendance!

At a reception at Kensington Palace for the England Under-20 football team, the 35-year-old royal told head coach Paul Simpson that it had been a “good day.”

“It went well,” he said. “There was one other parent who had more of an issue with their children, so I was quite pleased I wasn’t the one. It was really nice actually. It’s a nice school.”

The Duke of Cambridge, 35, was speaking just hours after his son had attended his first day at Thomas’s Battersea school.

The usually-chipper prince — dressed in his brand-new uniform made up of a navy V-neck jumper, a blue shirt, knee-length shorts, shiny black shoes, and a backpack — appeared too anxious to crack a smile for waiting paparazzi, but a new official picture shows a much more cheerful beginning to the exciting new chapter.

Taken at Kensington Palace before the school drop-off, the portrait shows the little royal flash a toothy grin toward the camera as he grips onto his father’s hand.

“TRH would like to thank everyone for all of the kind messages they have received as Prince George starts school,” a caption alongside the photo read.

The Duke and Duchess of Cambridge are very pleased to share a photograph of The Duke and Prince George at Kensington Palace this morning. The image was taken by @chrisjacksongetty shortly before Prince George left for his first day of school at Thomas's Battersea. Their Royal Highnesses are delighted to share this lovely picture as Prince George starts school, and would like to thank everyone for all of the kind messages they have received.

Sadly, The Duchess of Cambridge, who announced her third pregnancy this week, was too under the weather with severe morning sickness to attend.

Confirming she wouldn’t be in attendance, Kensington Palace explained via Twitter: “Prince George will this morning attend his first day of school at Thomas’s Battersea, accompanied by his father The Duke of Cambridge.”

“The Duchess wanted more than anything to be there. It’s a big day for her son. But she has been really very sick this week,” an insider told The Daily Mail.

But Prince William proved the be the perfect support for his first-born, dropping him off in the family’s Range Rover and walking him right to his classroom. 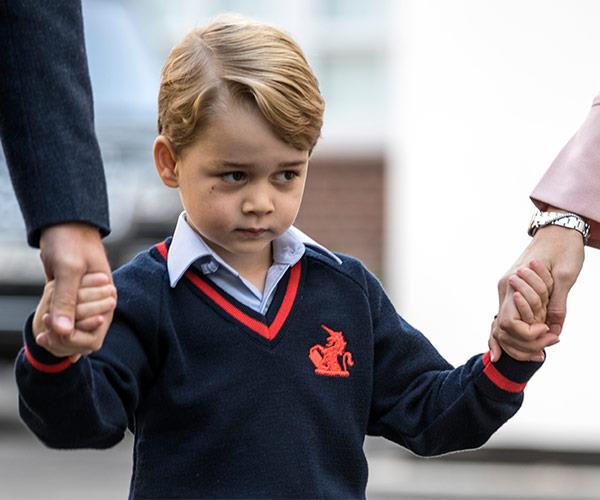 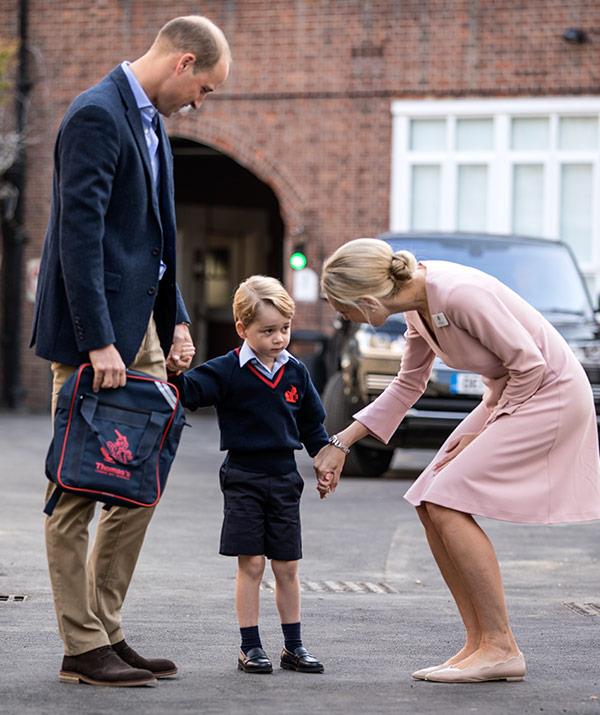 The prestigious school places large emphasis on the character they wish to build for their pupils. (Photo Credit: Getty Images)

Young George, who turned four in July, has been enrolled in one of three reception classes at the co-educational outpost, and he will join a mixed class of boys and girls at the school.

Upholding a set of core values — kindness, courtesy, confidence, humility, and learning to be givers, not takers — the elite school holds an impressive record of senior school entrance and scholarship successes.

Indeed, the Tatler Schools Guide says the “cream of the Battersea crop rises to the likes of Eton and Wycombe Abbey.”

The school, which is just a stone’s throw from their royal residence, currently has 544 day pupils, aged between four and 13.

This post was written by Candice Mehta-Culjak. For more, check out our sister site, Now to Love

The Royal Family Releases a Lot of Family Photos, But Kate Middleton Is Upset About These