Don’t be fooled by the colorful flowers doused in sunshine — spring isn’t exactly a picnic for everyone, especially seasonal allergy sufferers. Just when we think it’s safe to go outside, we’re hit by waves of pollen that make our eyes watery and our noses runny. So be warned: for those already planning on sniffling all through the warmer months, the “pollen bomb” video in the clip below will be nothing short of a horror story.

On Monday, May 7, New Jersey resident Jennifer Henderson terrified her allergy-prone Facebook followers with a video that showed her husband gently driving a backhoe loader into a tree. Just seconds after the vehicle grazed the tree, its canopy exploded into a yellow-green pollen mist that cascaded over the digger before dispersing smoke-like into the sky. Check out the sneeze-worthy video below.

“When my husband said the pollen’s bad, I probably should’ve taken his word for it. Crazy!” Henderson wrote on Facebook.

Julia Lowe Ehrhardt, program coordinator at Tyler Arboretum and an allergy sufferer, told FOX29 that blooming male maple, birch, and oak trees are to blame. One good gust of wind has the potential to send those pesky pollen particles traveling up to 400 miles away.

“It was like three seasons in one week,” she said. “The plants couldn’t make up their mind, so the early plants are late [blooming], meaning the cool spring kind of delayed them.”

“I personally know, [be]cause I’m affected by it,” Sheppard told UPI. “The last couple of days I’ve had itchy and watery eyes. We are in the height of pollen season and what came up recently was from the pine trees.”

What’s worse? Mother Nature is just getting started. AccuWeather reports a vast majority of the country is expected to receive moderate to high levels of pollen this season. 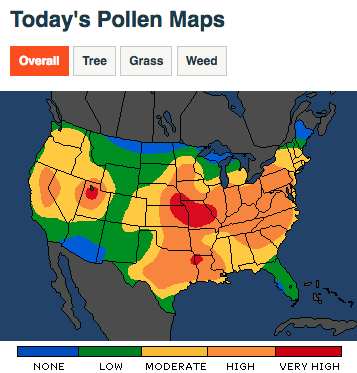 After seeing that much pollen wafting around, we think now’s a good time as any to stay in and catch up on all our soaps!

No, Baby Wipes Are Not Giving Your Child Food Allergies