Today, she’s the Duchess of Sussex, but years ago — way before she met now-husband Prince Harry — Meghan Markle was Mrs. Trevor Engelson. When the former actress became engaged to the Hollywood producer back in the early 2000s, he gave Meghan a gorgeous diamond engagement ring.

Then, four years after their divorce, Meghan received a second engagement ring when Harry popped the question in November 2017. So, how do Meghan’s two engagement rings compare to each other in style, carat-size, and cost? In a new interview, Closer Weekly exclusively spoke to Kathryn Money, Vice President of Strategy and Merchandising at Brilliant Earth, about Meghan’s two rings. Scroll down for a comparison of her beautiful rocks!

“Meghan’s engagement ring from her first marriage features what appears to be a round or cushion cut solitaire diamond of approximately 1.5 carats. This sparkling stunner is timeless and feminine, featuring a thin double band of pave diamonds set in either 18 karat white gold or platinum. For her former wedding band, Meghan opted for a simple diamond-accented band slightly larger than the bands on which her engagement stone was set,” Money exclusively told Closer of Meghan’s jewelry from Engelson.

According to Money, Meghan’s first engagement ring likely cost between $12,000 and $20,000, “depending on the quality and specific characteristics of the diamonds.” 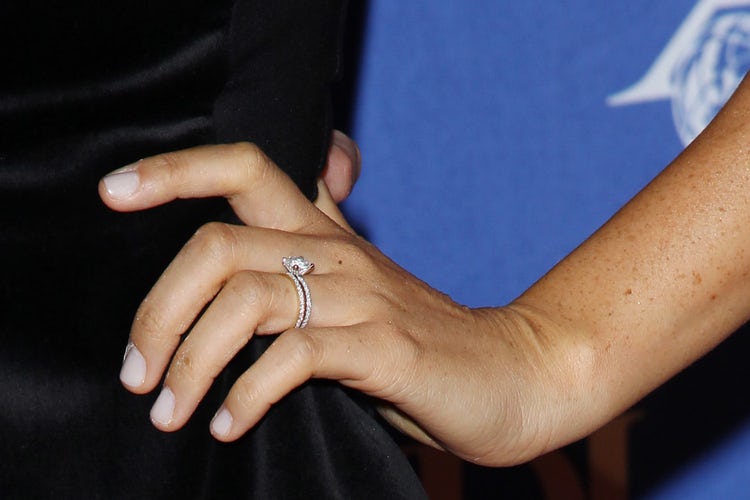 “Prince Harry custom designed Meghan’s gorgeous ring featuring a center cushion cut diamond framed by two round diamonds from Princess Diana’s personal collection. The stones are set on a timeless yellow gold band, befitting for a princess, while perfectly matching Meghan’s chic yet relaxed style. Another attribute that sets Meghan’s ring apart is that the center diamond is from Botswana, reflecting Harry and Meghan’s shared commitment to social and environmental responsibility. Botswana diamond mining has contributed to transforming Botswana into one of Africa’s most prosperous countries, and Botswana diamond mines are dedicated to minimizing their environmental footprint,” Money told Closer in a previous exclusive interview of the Suits star’s current rock.

“We also love the combination of old and new, with the two diamonds from Diana’s personal collection reflecting a connection to family and tradition, and the diamond from Botswana that represents the new connection between Harry and Meghan,” she continued. “We estimate that the center stone is close to 5 carats, framed by two diamonds that are roughly 0.75 carats each.”

“While both rings are stunning, Meghan’s current engagement ring is truly priceless with unmatched cultural significance due to the inclusion of diamonds from Princess Diana’s collection. Her current ring also features a trio of diamonds, with the center diamond weighing approximately 5 carats, and is set in yellow gold with an unadorned band, which is much different than her accented, more contemporary first engagement ring,” Money explained. Meghan is so lucky to have worn these two beyond-gorgeous engagement rings! 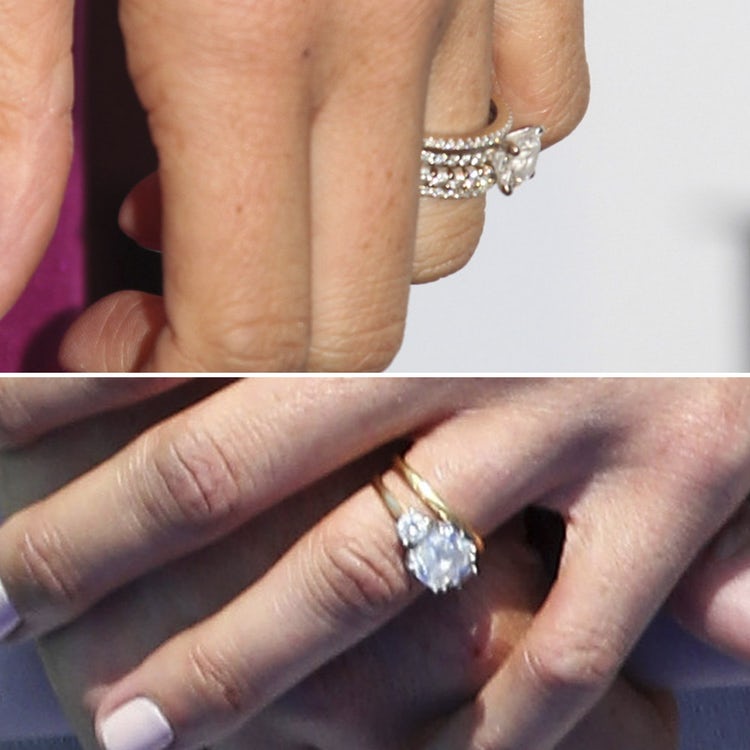