Meghan Markle‘s wedding to Prince Harry is fast approaching, but it’s clear there’s more on this bride-to-be‘s mind than the usual concerns of flower arrangements, chicken or fish, and just where to seat that pesky uncle who’s twice removed. During a surprise visit to Northern Ireland for a jam-packed day of official engagements, the former actress revealed she’s already thinking about starting a family with the beloved royal.

While touring Catalyst Inc. — a hub for tech entrepreneurs in Belfast, Ireland — with fiancé Harry, the 36-year-old met a husband-and-wife team who own Shnuggle — an innovative and hypoallergenic line of baby products. As she inspected a changing mat, a Moses basket, and a baby bath that allows the baby to sit up, Meghan said, “I am sure at one point we will need the whole thing. It’s very sweet.”

Sinead Murphy, who founded the company with her husband Adam, later said, “With an upcoming marriage, it’s likely there is going to be an announcement in the next few years. No pressure on the lovely couple! That’s the worst thing when you get married — people are just waiting.” Sinead added, “They seemed very engaged with the products. Harry was particularly interested in the bath. I wonder if he has witnessed bath time with his nephew [Prince George] or niece [Princess Charlotte]. As soon as he saw the bum bump [which stops the baby slipping down], he understood immediately. He said, ‘Oh, non-slip.'” Too cute! 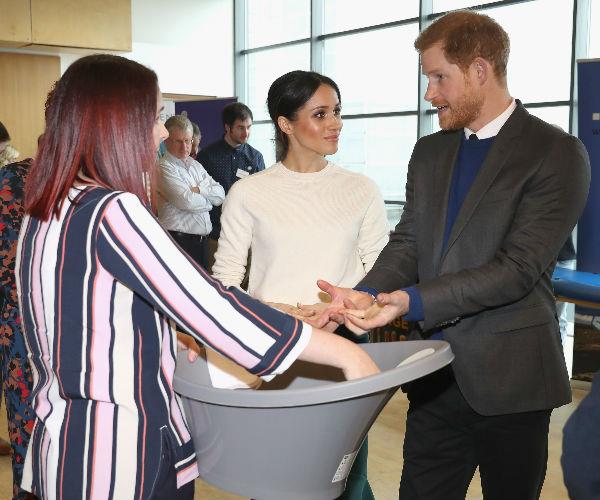 Meghan & Harry Talk to the Creators of Shnuggle (Source: Now to Love)

Instead of her usual trousers look, the royal-to-be opted for a midi skirt by Greta Constantine for the busy day. She accented the forrest green number with a cream Victoria Beckham sweater, Mackage coat, Charlotte Elizabeth bag, and brown velvet pumps. Meanwhile, Harry, everybody’s favorite ginger-haired royal, kept things low-key in a black blazer with a bright blue sweater over a white shirt. He completed the look with a go-to pair of suede desert boots.

Harry, 33, and Meghan, 36, also took the time to visit the Eikon Centre during their whistle-stop tour before dropping by one of Belfast’s oldest buildings — the Crown Liquor Saloon. There, they learned from the National Trust representatives about the pub’s heritage and met with local musicians and comedians. The loved-up couple then travelled to the iconic Titanic Belfast — an attraction that tells the story of the Titanic, which was built in the shipyards of Belfast.

Meghan and Harry, as a couple, have now officially visited all four nations that make up the United Kingdom (England, Northern Ireland, Scotland, and Wales). It’s all part of their get-to-know Britain tour in the countdown to the royal wedding on May 19.

This post was written by Candice Mehta-Culjak. For more, check out our sister site, Now to Love.

How to Go Forest Bathing Without Going to the Forest