Prince Harry and Meghan Markle have once again proven themselves as firm crowd favorites. While greeting hundreds of flag-waving fans outside Cardiff Castle during their first official visit together to Wales on Thursday, January 18, the newly-engaged couple excitedly received a sweet wedding present — from another Harry and Meghan, no less!

Harry Smith and Megan Taylor, two kids from a local primary school, presented the duo with a Celtic spoon engraved with their initials. And though a kitchen utensil might not sound romantic at first, the custom of carving and giving “lovespoons” dates back centuries in Wales. In fact, young men would give spoons as a token of their affection.

Upon receiving the lovely present, Meghan reportedly told the younger Megan, “You’ve got freckles, just like me.” 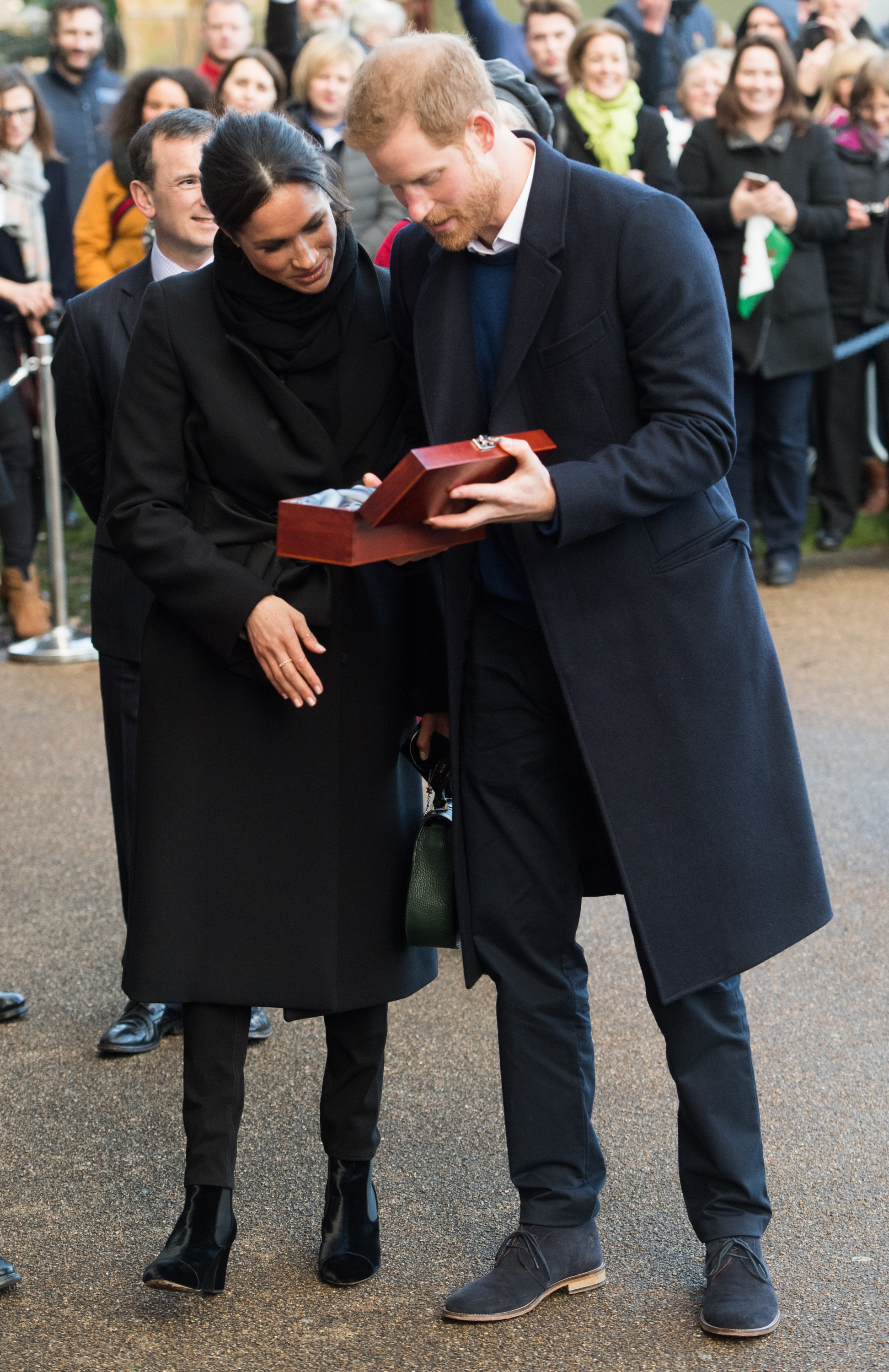 Meghan, 36, looked stunning in a familiar color palette of neutrals for the occasion. She opted for a long black Stella McCartney coat that was cinched at the waist with a wide ribbon-style belt and black boots. She accented the look with a saddlebag-shaped purse in emerald green by the British brand Demellier. Harry, 33, kept things low-key in a black overcoat with a bright blue sweater over a white shirt.

During their tour to the region, the duo also dropped by Star Hub, which is a community and leisure center in Tremorfa, Wales, to see how sports arebeing used to engage young people and aid social development. It was here that the beloved prince encouraged a group of dancing youngsters to “mob” his fiancée. “Let’s all give Meghan a group hug!” After swarming his bride-to-be in cuddles and squeals of delight for a few seconds, Prince Harry jokingly interrupted. “And release,” he said. “She’s mine!”

The couple’s visit to Wales — complete with the hand-holding we’ve come to expect from the lovely duo! — follows successful visits to Nottingham and Brixton in south London. It’s all part of their get-to-know Britain tour in the countdown to the royal wedding on May 19.

The couple became engaged over a roast chicken dinner at their home, Nottingham Cottage, on the grounds of Kensington Palace.

“It happened a few weeks ago, earlier this month, here at our cottage. [It was] Just a standard typical night for us. Roasting a chicken… trying to roast a chicken,” Harry said of the private moment during an interview with BBC News broadcaster Mishal Husain.

This post was written by Candace Mehta-Culjak. For more, check out our sister site Now to Love.

Dolls That Are Supposed to Look Like Prince Harry and Meghan Markle, Well, Don’t