Prince Harry’s fiancée is quickly becoming one of the world’s most famous women, so it makes sense that many people are curious about Meghan Markle’s family. After all, the former Suits actress is set to marry the beloved British royal on May 19. So, like Kate Middleton and Princess Diana before her, all eyes are now on the royal bride-to-be — along with her relatives. Unfortunately, there’s recently been a lot of public drama with Meghan Markle’s half-siblings and parents regarding both the ceremony and the complicated relationships between them all.

First things first: Meghan Markle was born on August 4, 1981, to parents Doria Ragland and Thomas Markle. A biracial daughter of a white man and a black woman, Markle explained in an essay for ELLE that she grew up in a diverse family in a not-so-diverse part of Los Angeles. “And there was my mom, caramel in complexion with her light-skinned baby in tow, being asked where my mother was since they assumed she was the nanny,” she wrote in the essay. Her parents split up when she was just two years old, and she recalled hearing comments from people about how it “makes sense” that they were no longer together right after she explained her ethnicity.

Her background also made things difficult for her professionally when she first tried to break into acting. As she put it in her ELLE essay, “I wasn’t black enough for the black roles, and I wasn’t white enough for the white ones, leaving me somewhere in the middle as the ethnic chameleon who couldn’t book a job.” Despite the many challenges she faced early on, she has spoken highly of both her parents’ upbringing and the happy memories they shared while she was growing up. Although she has no biological siblings, she does have two half-siblings from her father’s previous marriage. The pair has been speaking badly about her in the media amidst her father’s widely publicized health battle. Judging from what we know so far, we really hope that the whole family will somehow find a way to eventually patch things up. 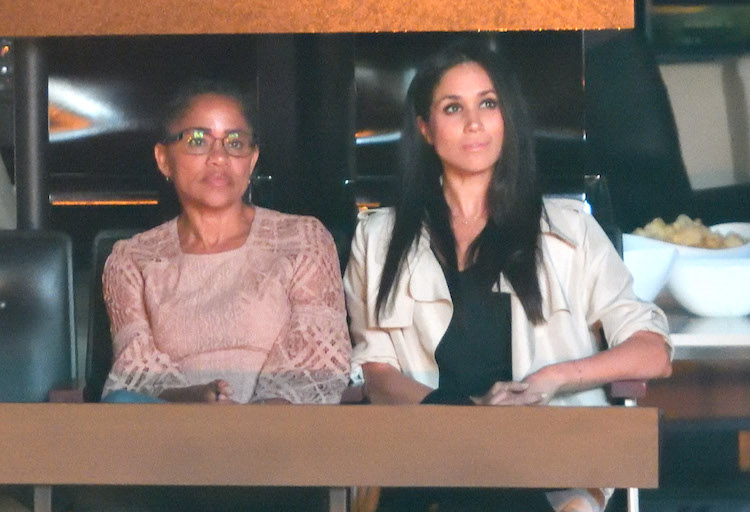 Meghan Markle’s mom Doria Ragland (not “Radlan,” as many outlets have incorrectly reported) is extremely close with her beloved daughter. Besides being a devoted mother, Ragland made a career out of helping people at a mental health clinic in the Los Angeles area. She reportedly quit her job days before the royal wedding, but fortunately, it sounds like things ended on a high note.

“It was Doria’s decision to leave,” a source told Us Weekly. “She has talked about starting her own private practice, focusing on working with elderly patients.”

Considering how often Meghan has publicly praised her mother’s professional and personal accomplishments, we’re sure she’ll do well wherever she goes.

Markle previously wrote of her mother in Glamour: “For me to watch this level of life-long sensitivity to nurturing and caregiving, but at the same time my mom has always been a free spirit. She’s got dread locks and a nose ring. She just ran the LA Marathon. We can just have so much fun together, and yet, I’ll still find so much solace in her support.”

We hope Ragland is giving her as much support as she possibly can right now, because goodness knows she needs it.

Meghan Markle’s father, Thomas Markle, has been in the news quite a bit lately for some sad reasons. The main topic has been whether or not he will attend his daughter’s wedding — and the latest report from him is no because of heart surgery. Meghan Markle has confirmed his absence in a statement of her own: “Sadly, my father will not be attending our wedding. I have always cared for my father and hope he can be given the space he needs to focus on his health. I would like to thank everyone who has offered generous messages of support. Please know how much Harry and I look forward to sharing our special day with you on Saturday.”

This follows an earlier report that Thomas Markle no longer wanted to attend the ceremony due to his embarrassment over staging paparazzi photos of himself reading a book about Britain and Google searching articles about his daughter. Although he has backtracked on that original statement, saying that he did want to attend, it seems like right now he needs to focus on his physical well-being.

The palace officially responded to the dramatic saga with this statement: “This is a deeply personal moment for Ms. Markle in the days before her wedding. She and Harry ask again for understanding and respect to be extended to Mr. Markle in this difficult situation.”

Thomas Markle currently resides in Mexico. Before moving there, he had a career in Hollywood that included being the lighting director for the popular sitcom Married With Children. Meghan Markle has said that she doesn’t remember ever seeing him fight with her mother while she was growing up, even though they split up when she was young.

“We would still take vacations together. My dad would come on Sundays to drop me off, and we’d watch Jeopardy! eating dinner on TV trays, the three of us. We were still so close-knit,” she previously shared in an interview with Vanity Fair.

On Father’s Day 2016, she wrote a special message for her father on her now-deleted Instagram page: “Happy Father’s Day, daddy. I’m still your buckaroo, and to this day your hugs are still the very best in the whole wide world… Thanks for my work ethic, my love of Busby Berkeley films & club sandwiches, for teaching me the importance of handwritten thank you notes, and for giving me that signature Markle nose.”

We hope that Thomas Markle gets well and that he’s able to see his daughter as soon as possible.

All About Meghan Markle’s Half-Siblings

Samantha Grant, Thomas Markle’s oldest child from his first marriage, has been vocally critical of her half-sister, describing her as a “shallow social climber” and reportedly writing a book with the working title The Diary of Princess Pushy’s Sister.

However, after learning that she was not invited to the royal wedding, she tweeted this response: “Family is family. I have an uncle I have only seen once but I would never say he is not family because we are not close. Humanitarians move forward with love and kindness especially to family. Smoke and mirrors cannot hide the elephant in the room. Out of respect, tradition, and humanitarianism, the #Markles should be invited if 2,000 complete strangers are invited. Our uncle who got her the internship, brother, me, best friend of 30 years Nikki Priddy, nephews. Fact.”

Meanwhile, Thomas Markle Jr., who is Meghan Markle’s other half-sibling from Thomas Markle’s first marriage, originally claimed to be close with his sister and very publicly implied in an interview that she should get hitched to Prince Harry as soon as possibly. He previously said, “I think it is wonderful. As long as he takes care of and loves Meg, he doesn’t have to do anything else.” He even added that Prince Harry is a “lucky man.”

But these days, her half-brother — who is not invited to the wedding — is singing a different tune. He recently wrote an open letter to Prince Harry, begging him not to marry Meghan and calling her a “jaded, shallow, conceited woman that will make a joke of you and the royal family heritage.” He added, “I’m confused why you don’t see the real Meghan that the whole world now sees. Meghan’s attempt to act the part of a princess like a below C average Hollywood actress is getting old.”

Yikes! Clearly, Meghan Markle’s family is going through some serious strife right now. Ideally, we’d love to see them all eventually work things out, but it doesn’t seem like that’s going to happen right before the wedding. The least we can do is hope that her whole family can keep in mind that her wedding is supposed to be a special day that she’ll cherish for the rest of her life — and furthermore, it’s her day, not theirs.

Prince Harry and Meghan Markle’s Body Language Tells Us a Lot About Their Relationship, Expert Says