Sad news for Jennifer Aniston and Justin Theroux. Just days after Jen celebrated her 49th birthday, sources close to the couple exclusively told Life & Style that the two were living completely separate lives and had a “long-distance marriage,” as one source put it, just days before they announced their separation.

Despite spending the majority of his time in New York, Justin opted to return to LA for her birthday on February 11 — but it only made the former Friends star fear the worst. “[Justin had] arranged to throw Jen a small, intimate party and hang around for a few days before heading right back to New York,” a source told Life & Style. “And Jen thought he had plans to quietly file for divorce as soon as he returned. As time drags on, Justin seems to view his visits with Jen as obligatory, and he’s just been [going] through the motions. The marriage is all but over.”

Shortly after Life & Style broke the news of the split, the pair confirmed it with a joint statement. “In an effort to reduce any further speculation, we have decided to announce our separation. This decision was mutual and lovingly made at the end of last year. We are two best friends who have decided to part ways as a couple, but look forward to continuing our cherished friendship,” the couple said in a statement. “Normally we would do this privately, but given that the gossip industry cannot resist an opportunity to speculate and invent, we wanted to convey the truth directly. Whatever else is printed about us that is not directly from us, is someone else’s fictional narrative. Above all, we are determined to maintain the deep respect and love that we have for one another.”

A friend told Life & Style that the drama isn’t new — or surprising. “Jen saw the signs coming,” a friend said. “They were apart for a solid month before her birthday and it was pretty much radio silence between them.” During one of their rare calls, Justin warned Jen that he likely wouldn’t be with her for her big day. “Jen’s heart sank and she cried,” the friend added. “When they hung up, she felt like he’d already checked out of their relationship.” 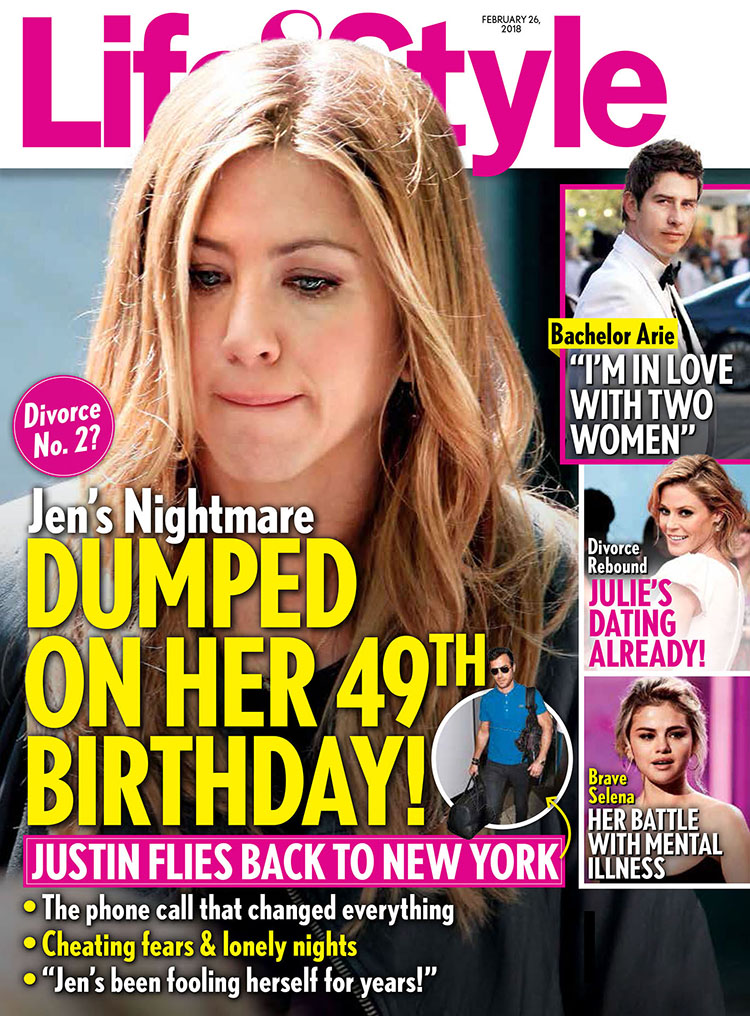 Interestingly enough, Jen likely has a good shoulder to cry on with all this — her ex-husband, Brad Pitt. As Life & Style previously reported, the two are getting close with one another in the wake of his impending divorce. The two have reconnected after Brad reached out to his ex-wife to apologize for wronging her in the way that he did. “He came off as genuinely sorry and Jen was deeply touched,” an insider said at the time. “She was completely won over.”

Maddox Jolie-Pitt Rejects the Spotlight Amidst His Parents’ Custody Battle

Get the Latest of Shiloh Jolie-Pitt’s Life!