UPDATE (7/5) —After putting his career on hold to focus on his young son’s battle with cancer, Michael Bublé has stepped back into the spotlight.

Michael, 41, accepted the National Arts Center Award in Ottawa from the Governor General of Canada on Wednesday, marking his first public appearance in months.

Addressing the audience, the Canadian singer said: “I stand here truly humbled that I have been allowed to be one of your musical representatives and that you would choose to bestow this honor upon me during what has been an emotionally difficult time for my family. I thank you for the love and support that you’ve given me and for the pride I’m filled with every single time I’m able to stand on a stage and say, ‘My name is Michael Steven Bublé, and I am Canadian,’” he continued.

MUST-SEE: Maria Menounos Opens Up About Her Brain Cancer Diagnosis

Speaking to his family—wife Luisana Lopilato; sons Noah, 3-and-a-half, and Elias, 17 months; parents; and sisters, he added: “There are no words to describe how I feel about you. Sometimes, ‘I love you’ just isn’t enough, because what I feel is just so much more.”

So sweet. We continue to wish Noah and the rest of his family all the very best.

This post was written by Candice Mehta-Culjak. For more, check out our sister site Now To Love.

UPDATE (5/4)—Over the past few months, Michael Bublé put the pin in his professional life following the heartbreaking news that his 3-year-old son Noah was diagnosed with cancer. Now that the brave tot is well and truly on the road to recovery, his dad can take a moment to celebrate.

Making his first official public appearance next month, Michael will accept Canada’s National Arts Center Award in Ottawa on June 28 from the Governor General of Canada. The very next day, he will be featured in the show’s live telecast.

The Center’s president said in a statement to ABC News, “We are delighted that Michael Bublé and his family are doing so well, and that they will all be joining us…all of Canada wishes the Bublé family the very best.”

“Michael Bublé is an exceptional singer and songwriter whose voice and stage presence have captured the hearts of audiences across Canada and around the world,” he continued. “We believe the award will be like a homecoming for him in 2017.”

MUST-SEE: Dolly Parton Is in Mourning

We look forward to seeing Michael and his family later in June.

This post was written by Chloe Lal. For more, check out our sister site Now To Love.

UPDATE (4/11) — Michael Bublé’s wife, Luisana Lopilato, is speaking out for the first time about the couple’s 3-year-old son Noah, who was diagnosed with cancer last year. As People reported, Lopilato opened up at a press conference in Buenos Aires about how Noah is doing in the midst of his cancer battle–and how it’s had an impact on her.

“It’s difficult for me to speak about this, it’s very recent and I’m still a bit sensitive about the subject,” she said in Spanish. “My son’s recovery is a long process as you all know and he has to continue with checkups. But we are very happy. We are looking forward to thinking about the future, to seeing our children grow.”

“Thank God my son is well,” she added. “When things like those that happened to us occur, your take on life changes. Now I value life much more, the now and the today.”

She took a moment to thank fans who had shown their support for her family during the tough times. She also opened up about how her religious faith played a key role in her strength.

“My faith in the fact God had a miracle helped me,” she said. “I became strong so my son would get better. I transmitted that to all my friends and family.”

Stay strong, Luisana! We’re continuing to keep you, your son, and your whole family in our thoughts and prayers.

UPDATE (3/10) — Just a month after Michael Bublé’s sister-in-law reported that Michael’s 3-year-old son Noah had a clean bill of health, the family has some emotional news. Bublé has pulled out of the 2017 Juno Awards—which is Canada’s biggest music awards show—in order to take care of his son.

Bublé himself has not confirmed that his son is 100 percent well yet, though his update he gave to E! Online back in February sounded promising: “We are so grateful to report that our son Noah has been progressing well during his treatment and the doctors are very optimistic about the future for our little boy.”

In the meantime, a spokesperson from the show understood Bublé’s reasons for pulling out.

The spokesperson said, “Our thoughts continue to be with Michael—we respect his ongoing commitment to his family and look forward to working with him again in the future.”

UPDATE (2/8) — It sounds like there’s more great news for Michael Bublé and his family! Following Daniela Lopilato, Bublé’s sister-in-law, revealing that the singer’s 3-year-old son Noah has a clean bill of health, Noah’s mom may have some wonderful news of her own.

Luisana Lopilato is reportedly getting ready to return to her work on a film in Argentina now that Noah has responded so well to cancer treatment. When her son was first diagnosed with cancer last year, both she and her husband dropped everything they were working on to care for him.

After such a scary, uncertain time for the family, we can only hope these positive updates continue!

(2/3) Our hearts broke when singer Michael Bublé shared news that no parent ever wants to hear: his 3-year-old son, Noah, had been diagnosed with cancer. But today, we’re happy to hear a positive health update from the family.

According to Daniela Lopilato, Bublé’s sister-in-law, Noah has gotten a clean bill of health, reports DailyMail.co.uk. Tomas Dente, an Argentine journalist announced during a TV show that Daniela had told him “[Noah’s] cancer has gone.”

Lopilato believes it is her sister and brother-in-law’s place to tell the world family’s health update, but it seems like she couldn’t stop herself from sharing a bit of the good news herself. Dente read Lopilato’s letter word for word on air: “Yes, Noah is recovering and we’re very happy that’s the case. His parents will speak when they want to do so.”

Bublé and his wife, Luisana, have not officially confirmed the news. However, they told E! News last week that Noah’s condition was improving. 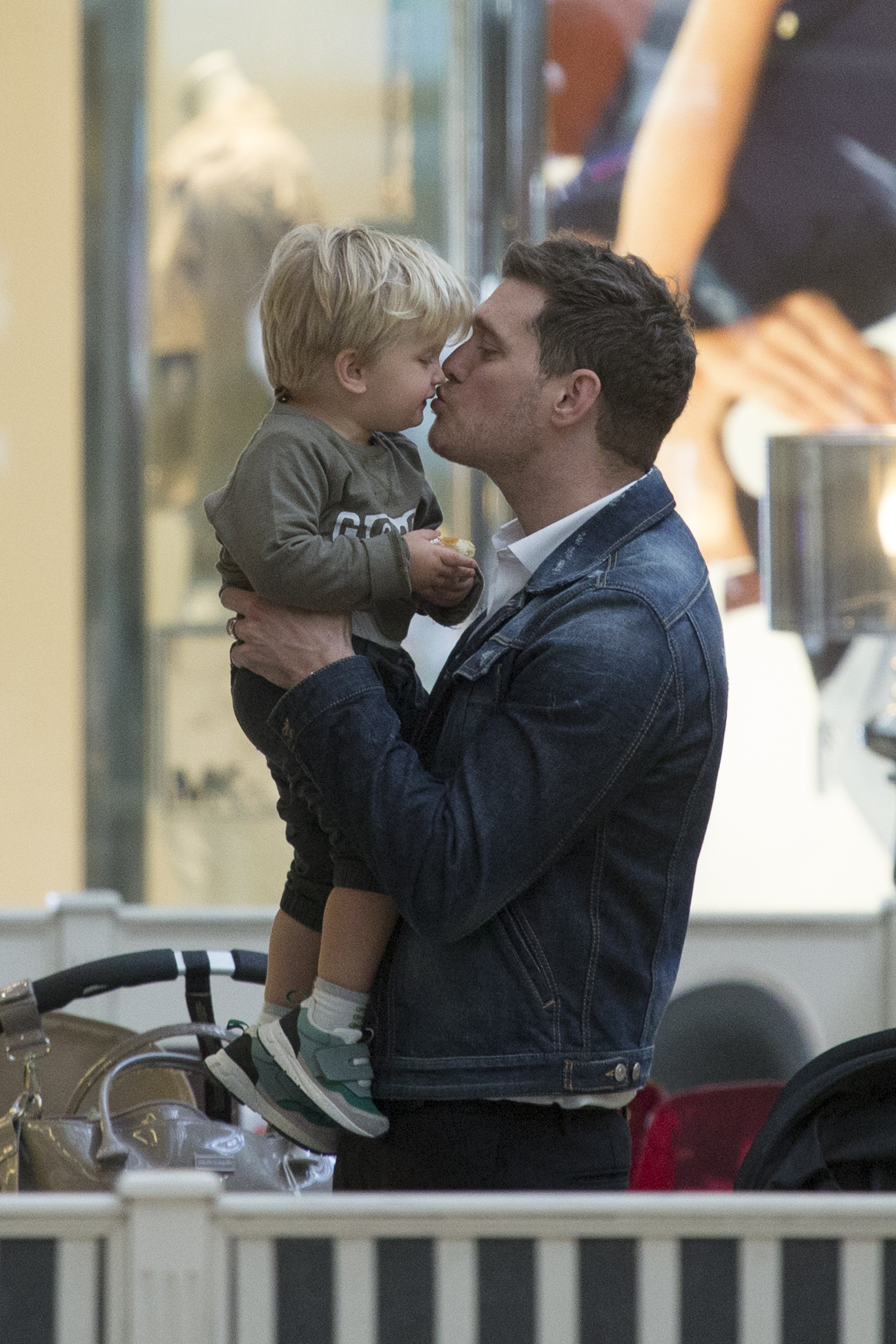 “We are so grateful to report that our son Noah has been progressing well during his treatment and the doctors are very optimistic about the future for our little boy,” read the statement. “He has been brave throughout and we continue to be inspired by his courage. We thank God for the strength he has given all of us.”

“Our gratitude to his doctors and caretakers cannot be put into words. We’d also like to thank the thousands of people that have sent their prayers and good wishes to us,” the couple said. “As we continue this journey, we are greatly comforted by your support and love.”

We’re so happy to hear that Noah is doing much better, and can’t wait for the official word from his family.

Bublé broke the news of his son’s cancer diagnosis late last year on his Facebook.

“We are devastated about the recent cancer diagnosis of our oldest son Noah who is currently undergoing treatment in the U.S.,” Bublé said in his initial statement.

It was later revealed that little Noah was suffering from liver cancer and would immediately begin chemotherapy. Treatment was expected to last for four months, and doctors gave him a 90 percent chance of surviving.

Not surprisingly, Bublé put his career on pause to be with his son during treatment, even pulling out of hosting the Brit Awards this year. Fortunately, doctors released Noah to his family during the holidays so they could spend Christmas together.

NEXT: See which celebs are cancer survivors.